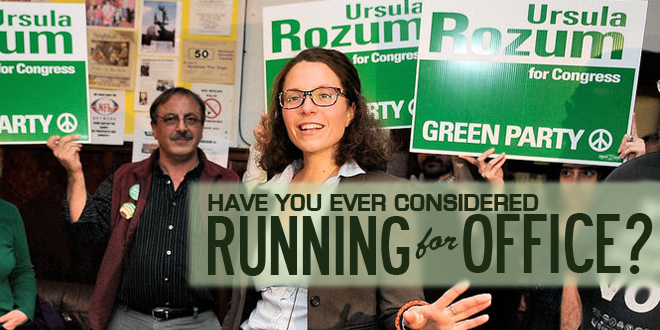 The establishment parties are moving us in the wrong direction. Neither corporate-funded party is demonstrating the values and vision we need to revolutionize American politics.

The Greens are the only national party with a consistent stand against corporate money in politics, and a platform that could unite millions in a new populist progressive movement. In today’s political climate, a rising party that empowers regular people to run for office to fight for the people - not lobbyists or corporate PACs - has the potential to catch fire.

At the local level, Greens in Wisconsin have won over 50% of the races they’ve entered. Running more candidates at all levels will not only make a difference in our communities, it will also help build the critical mass we need to win higher office and turn our values of peace, justice, democracy, and ecology into reality.

A shocking number of elections - especially at the local level - go uncontested, which means even more opportunities for concerned citizens to have an impact.

The period for signature gathering to get on the ballot for local races is open now until January 2nd.

PS. Not ready to run for office, but want to support those who do? Donate to the Wisconsin Green Party here!