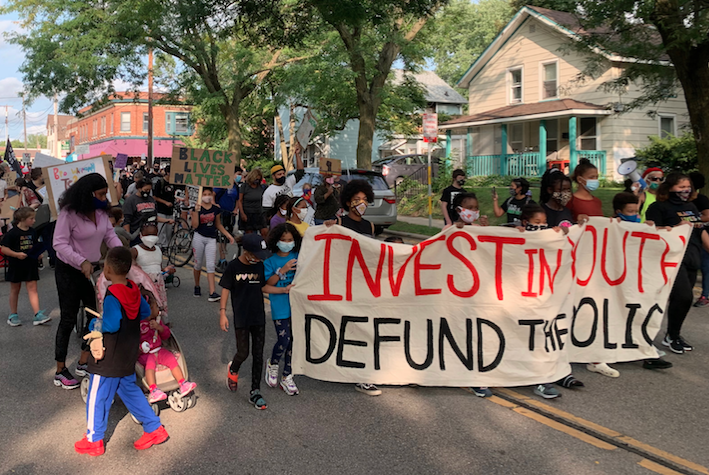 The systemic racial abuse at the heart of our society cannot be allowed to continue. George Floyd was murdered by the Minneapolis Police Department at the hands of Derek Chauvin. Breonna Taylor was murdered in her own apartment by the Louisville Police Department. Jacob Blake was shot 7 times in the back and paralyzed by a Kenosha police officer. These heinous acts are just a few in a long line of extrajudicial executions performed by or with the implicit or explicit approval of agents of the state. Justice rarely comes when the killers are the police, and so often the targets of police violence are Black men, women, and children.

The first and longest standing function of police in America is the maintenance of racial hierarchy and the subordination of black people -- a function they fulfill in the present via the murder of BIPOC with impunity, as well as mass racially-disproportionate arrests; which even when not resulting in incarceration, feed people into the greater criminal justice system --effectively barring access to many gainful opportunities for the remainder of one’s life.

Across the country streets have erupted with rage-filled calls for justice -- no less so here in Madison and Dane County. For several years running, Wisconsin has been named the worst state in the nation in which to be black, with Milwaukee and Racine being listed as the 2 worst cities in the country to be black. In Madison the situation is just as bad,and has only gotten worse in recent times. In a March 4, 2020 article the Capitol Times reported:

In Madison schools last semester, blacks who make up 18% of students, were handed 57% of all out-of-school suspensions. Last year, the district posted modest gains in black student achievement and graduation rates in its annual report, which it attributed to implementation of its 2012 framework, but the achievement gap remains among the worst in the nation.” ‘(None of this has changed)

In spite of these shocking criminal justice disparities in our city and county, the response of our local leadership to the deteriorating and increasingly untenable condition of the Dane County Jail is to attempt to build a new, even larger jail at the staggering cost of $148 million dollars. Instead of reducing the number of inmates -- a disproportionate number of whom are people of color -- they seek to simply increase the penal systems’ carrying capacity and add a new coat of paint. You cannot cure injustice by expanding it. We support Resolution 145 “ADDRESSING SYSTEMIC RACISM IN THE DANE COUNTY CRIMINAL JUSTICE SYSTEM AND INVESTING IN ALTERNATIVES TO INCARCERATION OUTSIDE OF LAW ENFORCEMENT”.

We stand with a growing coalition of community members and organizations who are calling on the Dane County Board of Supervisors to match their words of support for racial justice with actions, and use our resources to build the people, not the jail. We call on the Dane County Board to stop delaying Resolution 145 in committee while plans to build the jail move forward, and to place the resolution on the board agenda for discussion, debate, and a vote.

While the police murders of BIPOC and the current failures of the criminal justice system captures news coverage, and energizes activists to take action, racial injustice takes many other forms in our state that affect the quality of life for Wisconsin BlPOC. Milwaukee has a long history of racial discrimination in housing, and to this day remains the most segregated city in the country. But while many know of Milwaukee’s status, fewer are aware that Wisconsin itself is the most segregated state in the United States. A report released earlier this year by the National Association of Realtors revealed that overall Wisconsin has the third lowest rate of African-American homeownership. This is owed in part to racially-skewed decisions by mortgage lenders, with city data showing “between 2006 and 2016, applicants of color were denied by mortgage lenders three times more frequently than white homebuyers.”

According to the Kaiser Family Foundation, Wisconsin has the 2nd highest rate of black poverty in the United States, and a supplement to the 2018 Wisconsin Poverty report found that “[T]he black poverty rate is more than two-and-a-half times the overall Wisconsin poverty rate, and three to four times the white poverty rate” and “[s]tatewide, child poverty largely follows the same trends”. Higher rates of poverty means greater exposure to the hazards of capitalist labor, according to “A Basic Demographic Profile of Workers in Frontline Industries”, an April 2020 report from the Center for Economic and Policy Research 41.2% of frontline workers are Black, Hispanic, Asian-American/Pacific Islander, or some category other than white.” The rates are even higher for women of color. In the midst of the COVID-19 pandemic which worsens daily this reflects our society's priorities of who lives and who is most likely to die. Disparities in wealth are also intimately related to injustices criminal justice, and racial discrimination in housing. This should be intolerable in a society that purports itself to be equitable, yet Wisconsin is among the worst -- if not outright the very worst -- in the nation.

Racial injustice must be fought and eradicated in all its forms; it must be fought here in Wisconsin; and in Dane County, perhaps more than any other place in America.  We must work to make the changes needed so that Wisconsin is free of systemic oppression and full of opportunity for each and every one of its residents.