The Elections Committee reported on Greens’ involvement in a number of successful campaigns for city council, county board, school board, mayor, and Conservation Congress seats, in Madison, Milwaukee, and beyond. As part of efforts to support more candidates in the future, the Elections Committee announced a virtual Campaign School to be held Saturday December 19. Stay tuned for more on that soon! 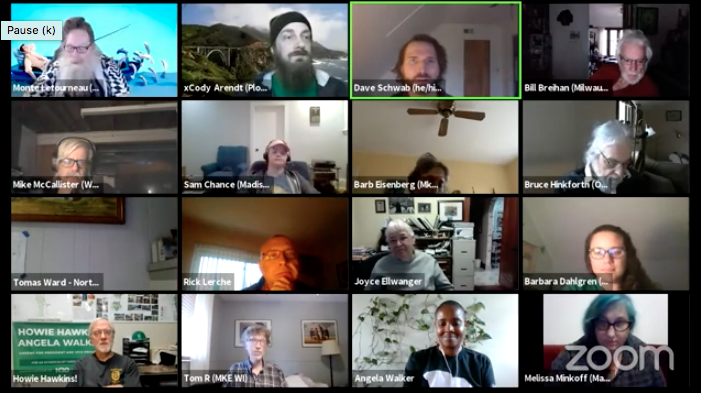 The Finance Committee reported a healthy balance that has grown over the year, thanks largely to member dues. The Membership Outreach Committee reported on successful efforts to recruit and engage dues-paying members, and the IT, Platform and Policy, and Communications Committees reported to the meeting and called for more members to join. Learn more about our committees and how to express interest in joining them here.

The Four Lakes Green Party (Dane County and South Central WI) reported on involvement in local coalitions, including efforts to prevent siting of F-35 fighter jets in Madison and halt a $148 million Dane County jail project, and a focus on upcoming local elections. The Greater Milwaukee Green Party shared its goals for 2020, including increasing the number of Green candidates, doubling dues-paying membership, supporting the Black Lives Matter movement, and launching a local Green New Deal campaign with a coalition of allies. The GMGP will hold officer elections in January, and is seeking a chapter media coordinator.

We discussed two proposed amendments to the WIGP bylaws: The first is a modification of "Article 2, Section 8, Removal," which would expand current language concerning removal of candidates or elected officials from the party to include members, establishing a consistent standard for accountability. The second is to update the language of "Article 10, Discrimination, Section 1, Conduct," to bring it in accordance with the WIGP Code of Conduct. This was the first presentation of these proposed changes, which will be presented again at the Spring Gathering for approval.

After our officer elections, we heard from four excellent guest speakers. Cheri Honkala, 2012 Green Party VP candidate and National Coordinator of the Poor People’s Economic Human Rights campaign, spoke about organizing low-income folks and people of color in this time of upheaval and uprising. Howie Hawkins, 2020 Green Party Presidential candidate, co-founder of the national party, and the first candidate to run on a Green New Deal in the US, spoke about the 2020 Green national campaign and ongoing efforts to organize a mass independent party of the left from the bottom up.

Lisa Savage, independent Green candidate in Maine’s historic 2020 ranked-choice voting Senate race, spoke about her campaign and the experience of running as a Green under ranked-choice voting in a nationally-watched race. Angela Walker, Milwaukee native, union organizer and 2020 Green VP candidate, spoke about her experience running as a working-class Black woman and the need for Greens to continue organizing for the change we need in marginalized communities.

Following guest speaker presentations and Q&As, we had a wide-ranging open discussion that touched on many of the most pressing issues we face. Howie Hawkins was kind enough to stay and participate in the discussion, which he said fit into his post-campaign listening tour.

Throughout the day, many Greens both new and experienced expressed determination to redouble our efforts to build the party for people, planet, and peace over profit. Party officers called repeatedly for anyone interested in helping to get involved, whether by becoming a dues-paying member, self-nominating to work on a state party committee, volunteering to organize a local or congressional district chapter, or running for office.

Finally, we thanked outgoing Co-Chair Barb Dahlgren for her leadership over the past two years, including her heroic efforts leading our ballot access petition drive in this difficult year. We’re glad that Barb will continue as a member of the Coordinating Council and the Elections Committee.

P.S. The Green Party is a people-powered party that refuses to take money from corporations, lobbyists or super PACs. We rely entirely on people like you for support. Please consider making a contribution to support our work - thank you!