In July 2018, Democrats on the U.S. House Administration Committee released a report on the election security of the Top 18 Most Vulnerable States (link to its PDF download). Wisconsin is in Tier 2, of 3. 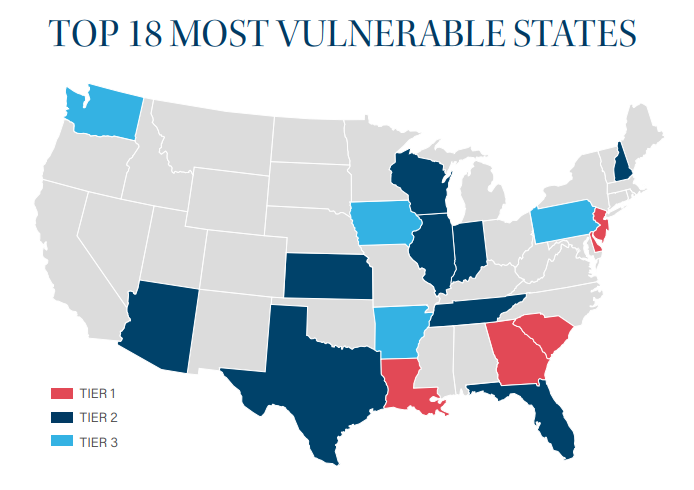 Democrats on the U.S. House Administration Committee wrote the report, not Homeland Security.

Tier 1 (Worst): States that have the most serious election security vulnerabilities. These states rely exclusively on electronic voting machines that do not have paper record. It is nearly impossible to determine if paperless voting machines have been hacked and if vote tallies have been altered.

Tier 2 (Bad): States that have significant election security vulnerabilities but may not be planning on using federal assistance to address their biggest vulnerabilities.

Tier 3 (Still bad, but needs funding): States that have significant election security vulnerabilities and are using their federal funds to address those issues, though they need additional assistance to fully upgrade their election infrastructure.

Congress appropriated $380 million in March 2018 to the Election Assistance Commission (EAC) for distribution to states to enhance election security.

According to the report, Wisconsin's post-election audits do not confirm the accuracy of the final outcome. Stupidly, audits are conducted after the election is certified! Yes, that does make it pointless.

To combat this, Wisconsin requested $7 million from the EAC, but in 2017 Governor Scott Walker undermined the effort with a veto against creating five additional positions in the Elections Commission. The commission has again requested funding and a new position dedicated to election security.

In 2017, the Republican Governor actively undermined election security efforts by issuing a line-item veto of the budget that would have created five additional positions in the state's Elections Commission.

Speaker of the House Paul Ryan, from Wisconsin, has also refused to allow any committees to hold hearings pertaining to foreign interference of elections.

The report's recommendation is for Wisconsin to issue a plan for election security funds and to include robust post-election audits. Some of this has recently been achieved. On September 26th, the Wisconsin Elections Commission (WEC) passed a vote to do "hand-counted audits of 5% of the voting machines completed before election results are certified, at least in November general elections." (quoted from Karen McKim). That is definitely a good step forward. A small step, but a step nonetheless.

To give credit where due, this was progress made by the 2016 recount. Jill Stein's campaign and Karen McKim have been doing considerable work to evaluate and improve our systems. Let's keep this rolling. As McKim points out in her article:

First, they don't include enough voting machines--only 5% of the machines statewide.

Since these machines are proprietary, we have a hard time inspecting the code and have many other hurdles in front of us. It is vital that more computer literate and security conscious citizens get involved with this. This appears to be a wonderful opportunity to get open source programming involved with modern code and security practices.

These are the states and their tiers: