“It is my belief that ‘those closest to the problems are closest to the solutions but have the least amount of resources’. All people have value. We have the responsibility to exercise our right for democracy.” - Sharyl McFarland 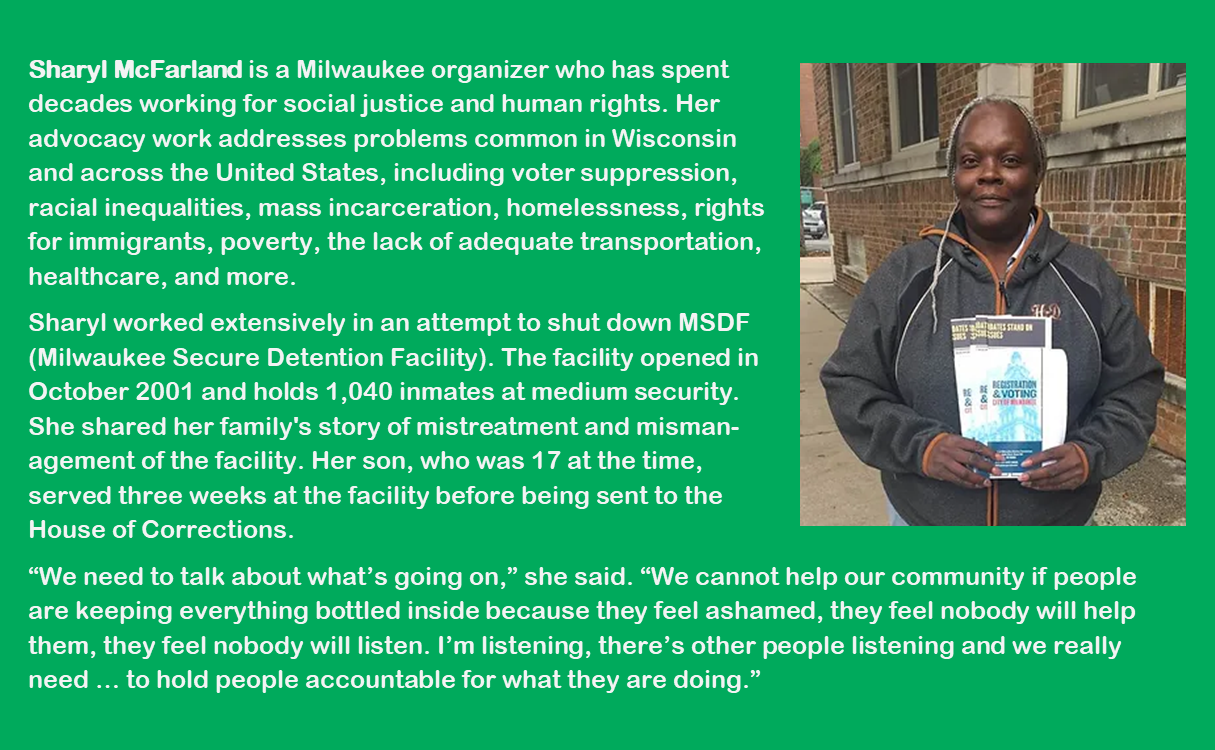 What I will do as Secretary of State

Voting is the right of every American. Every election cycle we go to the polls and cast our ballot for whom we believe is the best of us to serve the public interest.

​The integrity of our elections have been called into question and we demand answers.

​The only way to have free and fair elections is to have hand counted paper ballots, with routine post-election audits to ensure that every vote is counted equally and fairly.

​In addition we need a completely non-partisan election commission. We need to end the WEC rampage of discrimination against independent politicians.

Time and time again, our voter rolls are purged and citizens are denied their most fundamental rights. These unconstitutional purges, along with voter ID laws, disproportionately affect low income households and people of color.

​All of this is done in the sake of "progress" and "voter fraud."

​When people of color vote, the establishment gets scared. We have the power to change the outcomes of elections and they know that. It is time we use that power to create real changes in Wisconsin and across the country.

It's the tale as old as time. The idea that a third party vote takes away from a major party. Democrats and Republicans use this train of thought to blackmail voters into their business as usual policies that do more harm than good to our communities.

​Yet, when Ranked-Choice Voting is presented as a solution, they turn their backs. Why? They are scared.

​If we implement a ranked choice voting system in Wisconsin and across the country, citizens will have the ability to vote for real policies that create progress without the fear of the worse of the two parties from winning.

​This scares Democrats because their policies are not popular and they are not progressive enough. When compared to the Green Party, they consistently lose.

Money controls our current political system. Without it, it is nearly impossible to win an election.

​In the Citizens United ruling from the Supreme Court of the United States, they claim that corporations are people and therefore can make political contributions. This leaves our politicians bought and paid for by corporations and special interests.

​Question: How can representatives getting large donations from these entities vote fairly and make fair decisions on policy that will impact a vast majority of Wisconsinites?

​It is time to get big money out of politics and make politicians work for us, again.

In Wisconsin, any candidate wishing to run for public office must collect a set number of signatures that the Wisconsin Election Commission then approves.

​These barriers are put in place to purposefully discriminate against third parties. It also creates a huge hurdle for ordinary people to seek out and win elections. Without a political party's help and support, collecting these signatures can be a monumental task.

One Person, One Vote

The United States of America is the only country on Earth with an electoral college system. This system does not represent the people.

​How this system works is that representatives are chosen to vote on behalf of the citizens in each state. The problem? They don't have to vote for the candidate that gets the most votes.

​Each vote should be counted and at the end the candidate with the most votes, wins. No games, no mistakes, and no doubt.

In Wisconsin and around the country, we have created a system that relies heavily on owning a car. The issue arises when low income household are unable to afford reliable transportation to work and other essential places.

​We need reliable public transportation and we need to increase our investments in it.

​We need support people of color, women, the LGBTQIA+ community, those with disabilities, and more.

​We should be judged not by how much money we make or the size of our homes, but how we treat those who are the most vulnerable amongst us.

In our Constitution, we are granted the right to bear arms. In that same Amendment, it states it must be "well regulated."

​Those in opposition to gun reform misplace their trust in the "shall not be infringed" before "well regulated." This has lead to increased access to guns and the misuse of them.

​No person should fear walking down the street in their own neighborhoods, sitting in a place of worship, theater, or school. In Buffalo, a predominantly community of color was attacked while the members of that community shopped in a grocery store.

​When do we say enough is enough?

Every child, regardless of background, race, religion, sexuality, gender identity, origin, immigration status, and economic status, deserves a quality education. When our children succeed, we all succeed.

​We can help our schools by providing more funding to public institutions, limiting school vouchers, paying our teachers more and offering tuition reimbursement, bringing more technology into classrooms and homes, while offering every child the opportunities they need to thrive.

We only have one planet to leave for generations to come. We have no "plan b" and nowhere to go once we have destroyed our planet. We need radical change to address the monumental problems that face us.

​We can make all public buildings, such as government buildings, schools, libraries, and police stations completely emissions free. We can provide tax breaks for electric vehicles. We can have stricter laws regarding pollution and littering of Lake Michigan, rivers, parks and streets. We can plant more trees by incentivize public service for better unemployment benefits and MORE!

​In doing all of this, we can provide higher paying jobs, more education to workers and better benefits.

​What do we want to leave our children when we are gone? Polluted oxygen and water they can not drink?

​We can lower costs of prescription drugs through stricter regulation on pharmaceutical companies and we can lower healthcare costs by supporting universal, single payer, plans.

​That is how we revitalize our healthcare system, our economy, and our health.

This industry, through taxation, can provide hundreds of millions of dollars to improving our schools, public roads, social programs, environmental programs, rainy day fund and more! All through legalizing a nonaddictive drug for adult enjoyment. It is a win-win.

To put it as simply as possible, no person should work a full-time job and live in poverty. In the richest country in the world, how can we allow our highest earners to gain millions and billions during a pandemic while those who live below the poverty line continue to make the exact same?